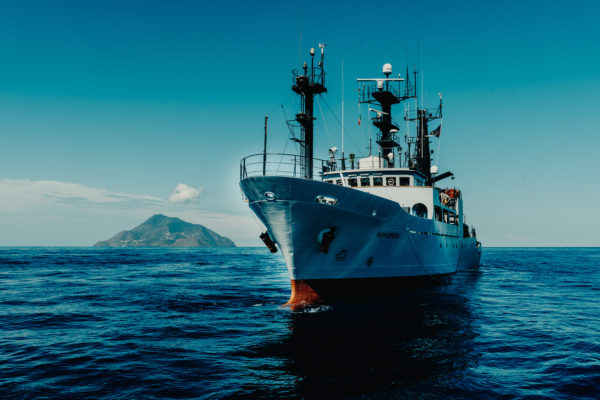 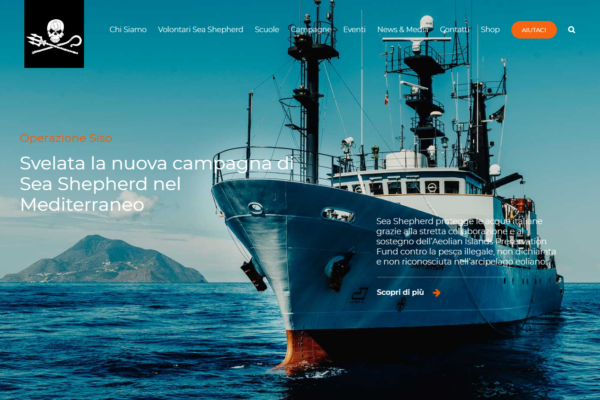 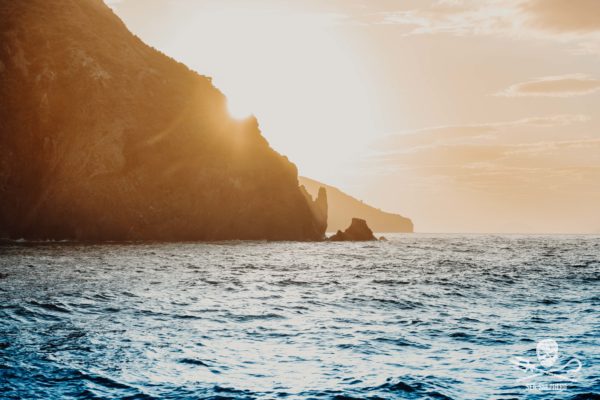 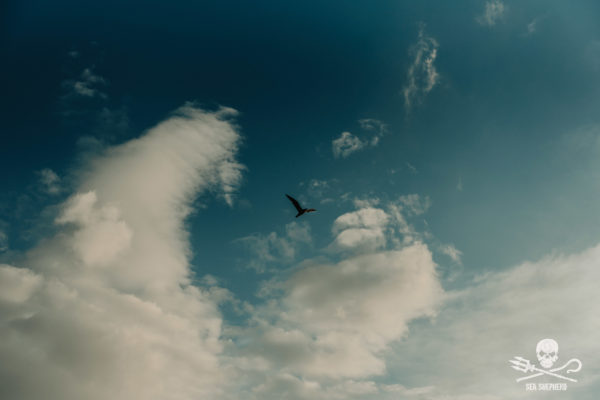 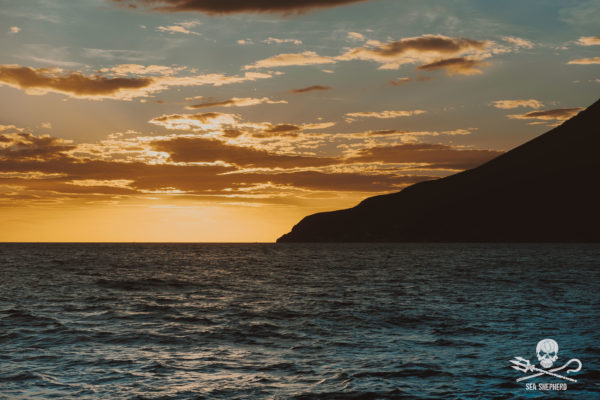 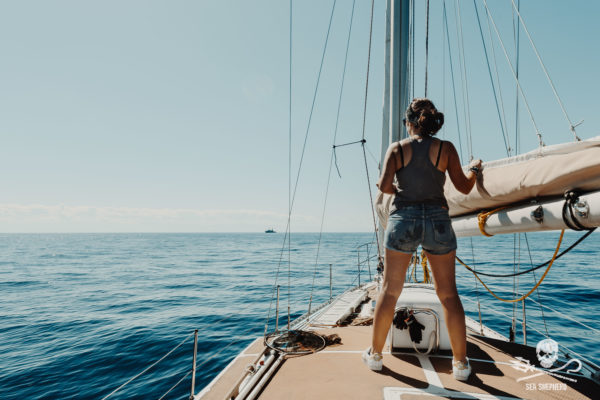 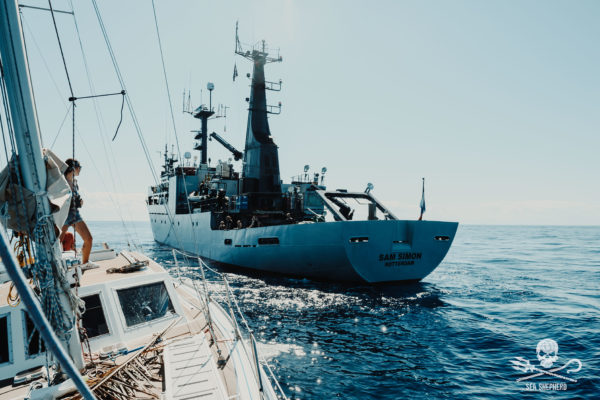 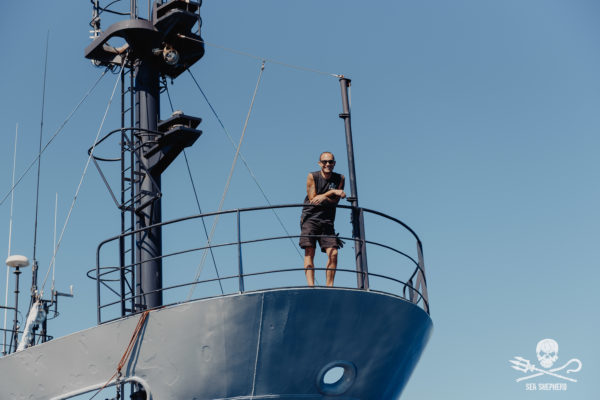 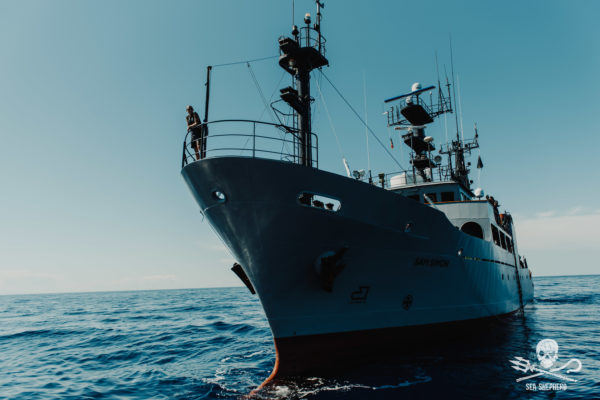 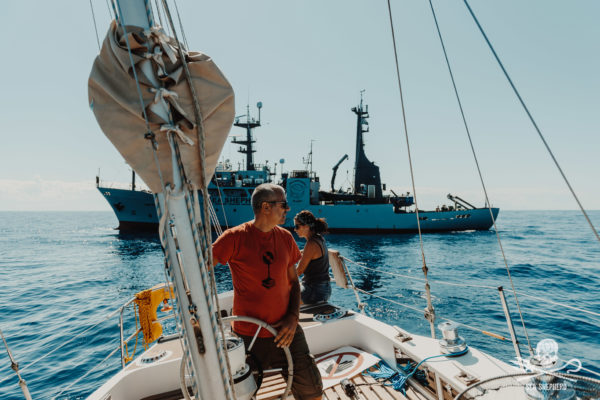 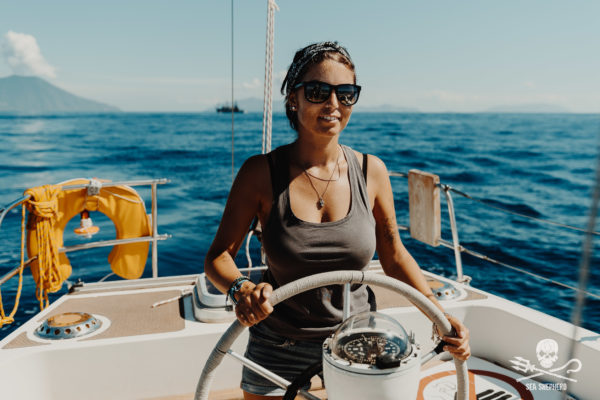 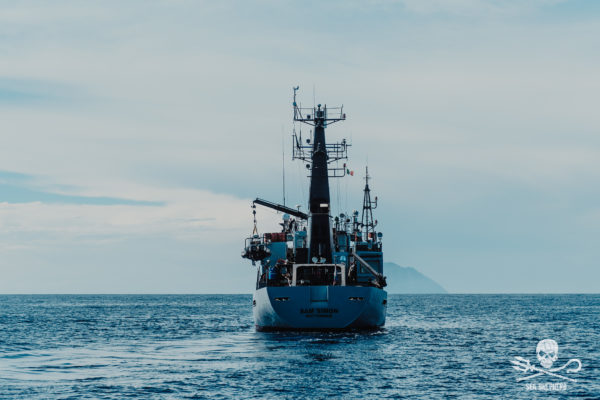 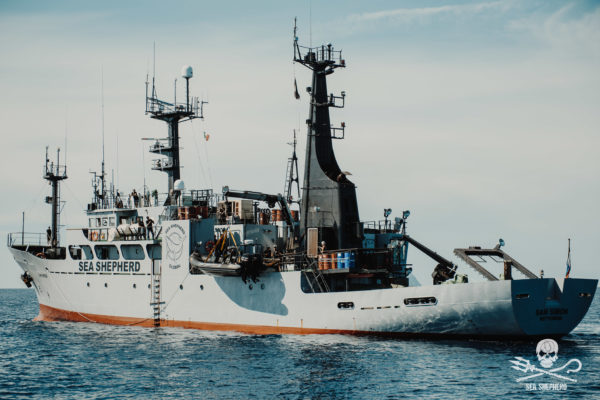 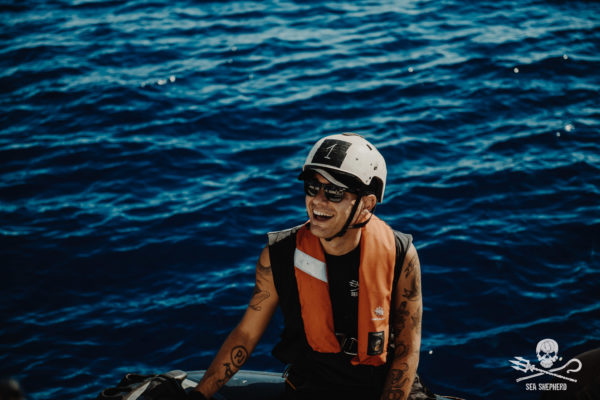 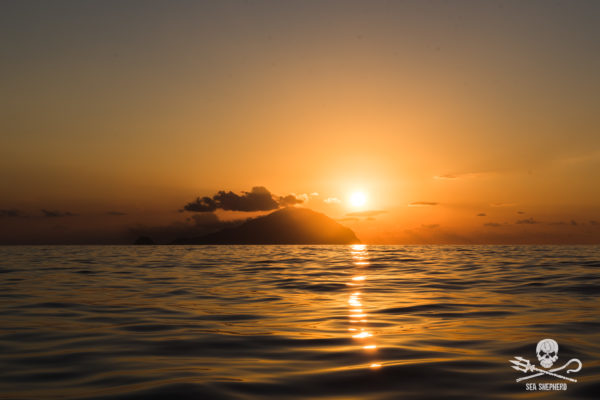 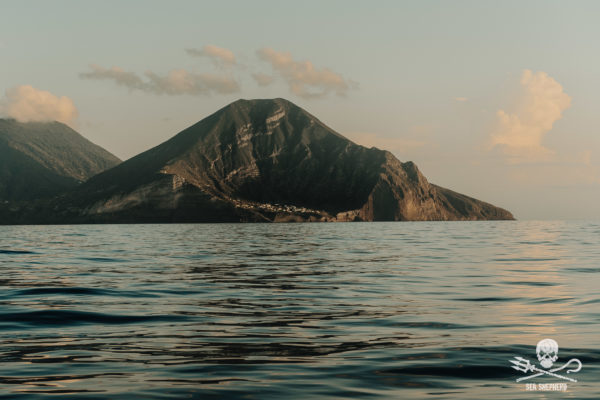 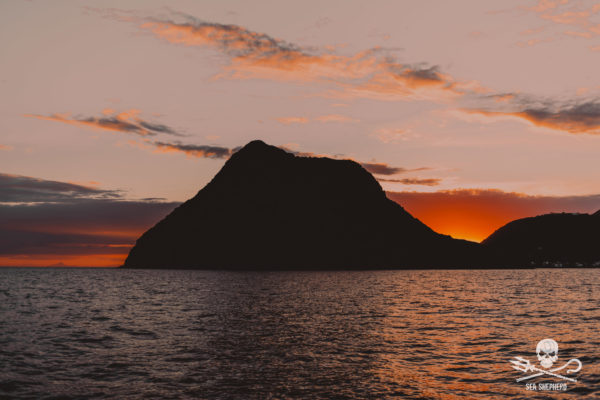 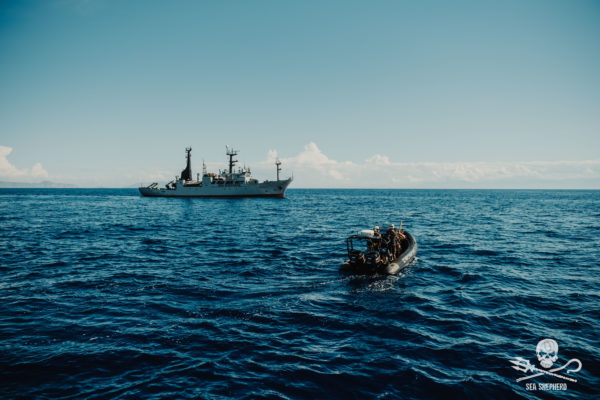 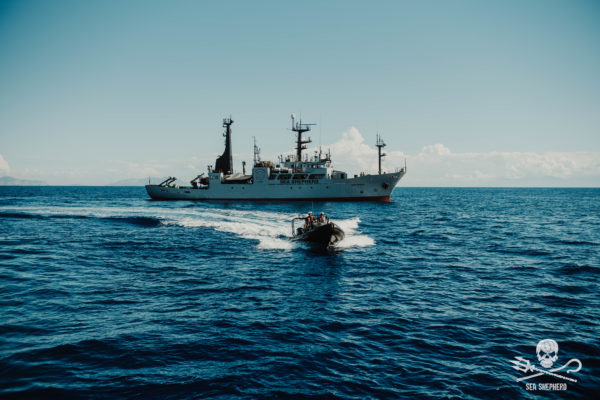 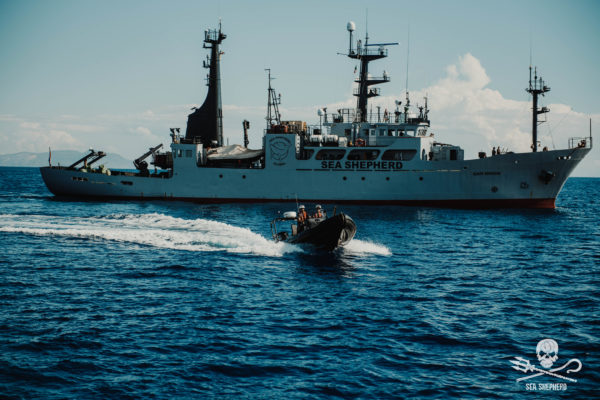 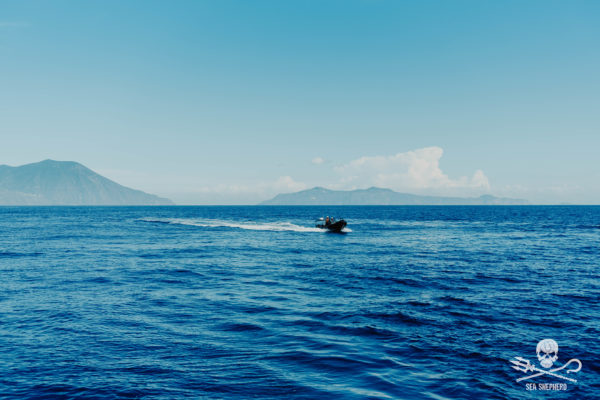 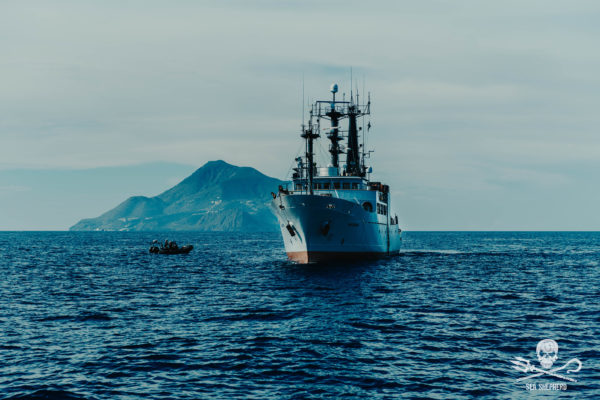 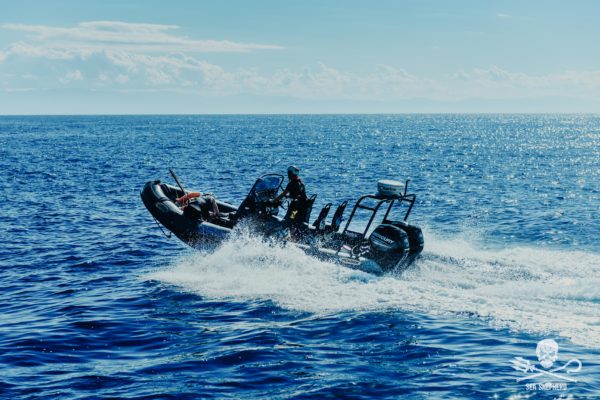 In 2017, crossing the Aeolian Islands archipelago, a young sperm whale remained entangled in an illegal “squadrara” fishing net. The Coast Guard spent many hours struggling to free him but couldn’t save his life. SISO was found dead along the coast of Milazzo Cape, with the net still coiled around the tail fin and with the stomach full of plastic, by the marine biologist Carmelo Isgrò who still today is conserving the skeleton to show it as a warning for all of us and the future generations on the damages we are causing to the environment. Carmelo decided to call the sperm whale with the name SISO in honor of the dear friend who helped him retrieve the sperm whale, and who died in a car accident in those same days.

The death of SISO due to an illegal drift net, is a clear signal of the presence of illegal fishing gear in the Aeolian archipelago. Moreover, the 2018 data from the Ministry of Agricultural, Food and Forestry Policies, updated as of 15th September 2018, confirm that 180.815,79 kg of illegal catch have been confiscated with a total of €7.649.914,8 sanctions applied.

It becomes clearly impossible for Sea Shepherd not to intervene, with the support of the Aeolian Islands Preservation Fund and Smile Wave.

The strategy of the operation provided for two Sea Shepherd vessels to be used: the M/V Sam Simon and a ship without logo on an undercover mission. The latter reached the area earlier beginning the monitoring of the eastern area of the archipelago, while the M/V Sam Simon was arriving from North and going towards South-West.

We left aboard the M/V Sam Simon from the Molo Italia in La Spezia on October 2nd with a purpose: to locate the illegal fishing gear and driftnets in the Aeolian Islands. The vessel was ready after 4 months on dry berthing, yet on day two it has been through the ringer: an increasing Sea State 5 that made it test a violent storm coming from North-East.

It was dawn when we reached the area north of the wonderful Alicudi and we have been welcomed by a pod of dolphins coming to cheer us and bringing a calmness to the sea that allowed us to promptly locate the first plastic jerrycans tied and anchored to a 3000mt deep seabed: the illegal FADs (Fishing Aggregating Devices).

In agreement and coordination with the Coast Guard, direct action sprang immediately: at 8.45am we hoisted aboard the first illegal FADs. From that moment on we started to locate and map on the GPS dozens of FADs which represent a real danger, even for turtles that most of the time remain entangled without the chance to break free, heading to certain death.

After two days of unrelenting efforts, the sea reinforced taking us inside the archipelago in the marine area in the South of Filicudi, a new area to patrol. At 9am something unexpected happened: in our binoculars, ready to spot potentially illegal fishing gear, a strong and recognizable puff appeared and then another! A wonderful sperm whale came to visit us, as if he wanted to join us in our search for SISO and the nets that killed him. It was him that brought us to the immediate sighting of dozens of other illegal FADs.

These illegal FADs threaten both the life in the Mediterranean and the local legal fishing. The local management plan of the Aeolian Islands archipelago regulates the use of the “cannizzi”: “In the area to be managed, specific zones will be identified in which the “cannizzi” can be anchored, and the number (maximum of 20), position and implementation (measure 1.4 of the European Fisheries Fund 2007-2013) will be planned. They will be assigned by draw to the fishermen and signed as to make them recognizable. Furthermore, to tackle the recent but progressive anticipation of the capture of the common dolphinfish, the posing of the “cannizzi” is established starting from September 15th and the beginning of the catching activities on September 30th.” The non-detectability and the complete lack of traceability of the FADs make them part of the illegal, unreported and unregulated fishing (IUU).

The results of 12 days of unrelenting direct action are 130km of polypropylene line and 1500 mt of fishing line of big thickness without hooks removed from the sea, and a total of 68 illegal FADs confiscated and several plastic bottles, some of them still containing polluting material inside.

The strategy of the Operation revealed to be successful when two fishing vessels, at the sight of the M/V Sam Simon, tried to distance themselves in order to fish illegally using the FADs. Our undercover sailing boat intercepted their route and, using the most powerful existing weapon, the camera, filmed them. Thanks to the documentation of the identifying details of the vessels and of the position, the Coast Guard and the Financial Guard have been able to intervene with investigations still going on.

With the arrival of the sailing boat in Anzio harbor, Operation SISO 2018 ended with the typical Sea Shepherd success and effectiveness, and it confirms the huge estimated presence of illegal FADs: over 5000 in the South Tyrrhenian Sea for an estimated total of 10.000km of illegal fishing gear that every year are put into water.

Thanks to the support of the Aeolian Preservation Fund and Smile Wave, the interaction with local communities has been perfect and during the stops at Lipari and Salina a lot of children and students came onboard. We also received onboard the representatives of the Aeolian artisanal fishermen that will cooperate with Sea Shepherd in order to increase the effectiveness of the next campaigns, and to defend with us this heavenly archipelago, with the purpose of creating a protected marine area which may lead to total protection, opening also the path towards the sustainable Blue economy in an ecological coexistence among species.

In memory of SISO, reinforced by the passion of our volunteers and the support of all the people who will help us, we will come back to the South Tyrrhenian against the illegal, unreported and unregulated fishing (IUU) and against the use of plastic. Lining up with the “bow toward the sea” with the biggest private fleet in defense of the life of those we call “our clients”, the inhabitants of the Oceans, our thirteen ships are positioned in almost all the seas of our planet.

The most important weapon that makes the difference is the passion of the individuals, the passion that encourages to not turn the back in front of illegality and cruelty but to fight them with direct action, without leaving neither plastic nor cruelty behind, but the sense of sharing and respect for all lives.

Help us by visiting www.seashepherd.it

This website uses cookies to improve your experience while you navigate through the website. Out of these, the cookies that are categorized as necessary are stored on your browser as they are essential for the working of basic functionalities of the website. We also use third-party cookies that help us analyze and understand how you use this website. These cookies will be stored in your browser only with your consent. You also have the option to opt-out of these cookies. But opting out of some of these cookies may affect your browsing experience.
Necessary Sempre abilitato
Necessary cookies are absolutely essential for the website to function properly. This category only includes cookies that ensures basic functionalities and security features of the website. These cookies do not store any personal information.
Non-necessary
Any cookies that may not be particularly necessary for the website to function and is used specifically to collect user personal data via analytics, ads, other embedded contents are termed as non-necessary cookies. It is mandatory to procure user consent prior to running these cookies on your website.
ACCETTA E SALVA